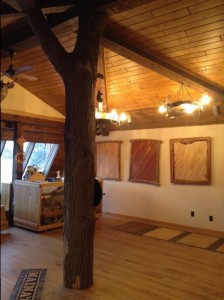 In the early 1960s Richard (Tex) and Pat Maina set out from Chicago with their two young sons to the great north woods of Wisconsin to try their hand at owning and operating  a resort in the Hayward area. Soon after, fire destroyed the main lodge and Tex had to rebuild using his creativity and construction knowledge acquired in Chicago. Tex and Pat operated the resort in the summer and worked at the bustling Telemark Ski Hill in the winters until their third  son arrived in the early ‘70s. Tex and Pat sold their resort soon after and relocated a few miles away where Tex began turning his interest in woodworking into a full time job.

Tex bought a local sawmill and planer setup with buildings, and began dismantling them to be moved to their new home and reconstructed. Tex started out making dimension lumber but found out early on that competing with the big mills to produce dimension lumber was going to be a tough road. In the late 1970s Tex’s oldest son Dave graduated High School and came on board to help Tex’s Lumber turn into Maina Hardwoods by specializing in manufacturing high quality, hardwood tongue and groove paneling and flooring.

Several fires later (which happens in the sawmill business!), Tex’s youngest son Steve joined to help rebuild the planer building destroyed in 2001 and has become a partner after Tex’s retirement. Dave and Steve still use the original 100 year old planer with patents dating back to the1800’s to machine all their products. A mix of home made and purchased machines help to complete their process from start to finish. A big orange forklift affectionately known as “Tennie” ( which looks like something from Mad Max Movies) and a 60’s vintage log truck move wood from place to place to keep the process moving.

With a new generation growing day by day Maina Hardwoods hopes to keep their reputation as  a quality wood products manufacturer for generations to come.

Thank you for visiting our site and God Bless!